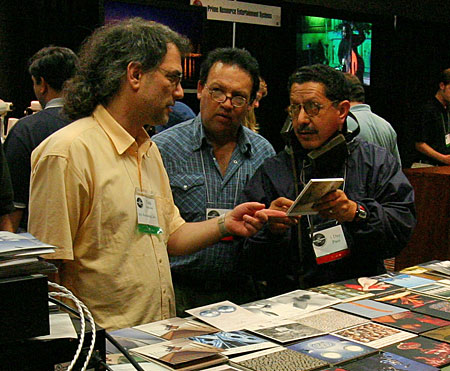 Music With a Mind of Its Own

Established in Japan in the spring of 1988, the MA label continues to issue provocatively creative musical statements in strictly acoustic settings.

While presenting mostly original music with elements of improvisation, structure, and traditional touchstones, the label is also “traveling” to lesser known areas such as Southern Siberia and Macedonia for some slightly different musical moments.

Technically speaking, the recordings are produced with only two omni-directional microphones, the signals of which are “fed” through exotic audio cabling into handmade and customized recording equipment, designed specifically for MA .

The MA website brings the newcomer “into the fold” and the enthusiast up to date, and also lists a few of the projects that are to be released in the future. Additionally, the new Series Momentum sub-label is introduced, presenting recordings not necessarily produced by MA, but which are never the less of musical integrity and deserve to be made available to the public.

Quite often, I lapse into modes in which I wonder why some of us insist on having music in our lives. The phenomenon of melodic sounds having a strong emotional impact on the human psyche is rather amazing when one considers the countless number of creatures on this planet that don’t really seem to care. For thousands of years, human beings have been creating what have become known as musical instruments and striking, strumming, bowing and blowing on or through them in such a way as to create sonic waves that, for reasons about which whole books are written, are found to be pleasant, useful and sometimes absolutely necessary. Throughout the history of so called “Art Music,” although some of these sounds or combinations thereof have not always been unanimously considered pleasant, their creators have endured and proceeded with their development, leading the way to the establishment of new “musical” frontiers.

The reason I am wasting all this ink is that, first of all, I believe it is healthy for those of us who do find music to be of value in our lives to think about why that just might be, and second, to contemplate upon the fact that a single sound and its quality, can have as much importance as a complete melody. For, without the initial quality of sound, the material really means a lot less. Creative musicians have always been aware of this and I think the listener will also find this to be of significance on all recorded performances presented on the M•A Recordings label. Since the outset, the importance of a solitary sound – its musicality and sound quality – has been one of the primary reasons for our existence.

In order to maintain the quality of sound, all M•A Recordings are produced in large, acoustically significant environments such as classical concert halls, churches and galleries. The importance of these environments cannot be overemphasized, as these spaces can only be considered as one of the co-creators of the recordings produced in them. The sounds created in a given space could simply not have been perceived anywhere else.